City Named Member of the Month; VP Talks about CASC 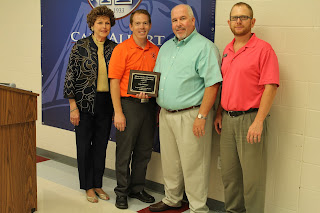 The City of Sallisaw was named the Sallisaw Chamber of Commerce Member of the Month at the chamber's monthly luncheon meeting Wednesday. Chamber President Darren Girdner, third from the left above, presented the award. Accepting are, from the left, Sallisaw Mayor Julie Ferguson, City Manager Clayton Lucas II and City Commissioner Daryl Legg, right.

Girdner noted some facts about the city before presenting the award.

He noted the city was established on March 17, 1886, when the Kansas Arkansas Valley Railroad, now Missouri Pacific Railroad, was completed. The first businesses were a cotton gin, a saw mill and a coffin shop, which eventually became Wheeler Funeral Home and is now Agent Mallory Martin Funeral Home and Cremation Services. The city has been in the possession of Spain, France, the Cherokee Nation and the United States.

*The city employs about 120 people.

*Sallisaw was the first in the state to have fiber optic services to the home, which is Diamondnet.

*Sallisaw is one of only three cities of the same size that owns its own landfill.

*Sallisaw is one of seven cities of the same size to own its own electric, water and sewer services.

*The city has 19 firefighters and a fire chief, and a low ISO rating at 5, which means lower insurance costs.

*Sallisaw is in the top 10 for the lowest crime rates for a city its size. The city has 23 law enforcement officers.

*The city has five parks.

*Sallisaw was recently named one of the top five retirement communities in the state.

*Sallisaw supports its own award-winning hospital.

*The city has its own community college, Carl Albert State College.

Girdner concluded, "Sallisaw has always been known as a progressive community with a commitment to improving utilities, parks and all other aspects that we as citizens are blessed to be able to enjoy on a daily basis."

CASC is one of 12 community colleges in the state and 12 institutions in the region, and educates about 10 percent of the state's population. "That's pretty impressive," Harrell said.

CASC and Northeastern State University, Tahlequah, have joined in a partnership for elementary and special education degrees for future teachers, which means students may transfer seamlessly from CASC to NSU while obtaining their four-year degree, and must only travel to NSU about 12 times per year.

The CASC Sallisaw Committee for Excellence has awarded $330,905 in scholarships to 480 students, Harrell said.

CASC President Garry Ivey also announced that CASC and Sallisaw Schools are working on a program for high school students.

Harrell told the chamber crowd, "I am very proud of this institution and I hope you are too."