Bill to Stop Veterans Center Comes Out of Committee 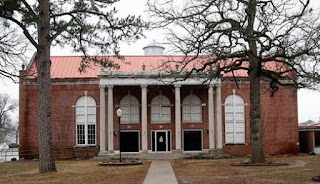 On Tuesday a bill designed to stop the relocation of a state veterans center from Talihina to Sallisaw passed through an Oklahoma House of Representatives committee by a vote of 6-2.

The bill, proposed by State Rep. Jim Grego of Latimer County, is now eligible to be heard by the entire House of Representatives.

The intent of House Bill 1149 is to repeal legislation that would close the Talihina facility and allow for transfer of the center to Sallisaw. It was announced last fall that the Oklahoma Veterans Commission and the Oklahoma Department of Veterans Affairs would move the 175-bed, long-term veterans care center from the aging Talihina facility to a new $100 million center in Sallisaw within the next three to five years.

“There is no reason the Oklahoma Department of Veterans Affairs can’t update this existing facility to better accommodate the needs of its residents,” Grego had stated previously.

The Talihina facility was built in 1921 and has been found to be in much need of repair and updating.

Rep. Chris Kannady, R-Oklahoma City, who originally authored the bill to relocate the facility to Sallisaw has changed his stance and today voted in favor of passing the new bill out of committee. Kannady is a native of the Talihina area and was quoted as having said that he changed his position on the facility's transfer due to a "change of leadership" in the Talihina area.

Elected officials have noted that all indications are that even though the bill has made it out of committee it will be dead on arrival when it reaches the house floor.